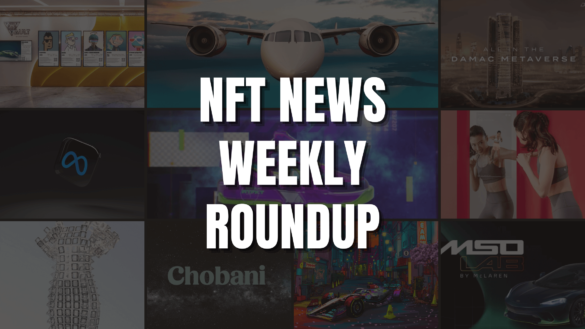 Recently, there has been a steady stream of NFT news, including partnerships with NFTs as subjects, new collection releases, and more.

NFTs are gaining in popularity and show no signs of stopping.

The company hopes to make NFTs more accessible to a wider audience with the new space, which will include a variety of NFTs from some of the world’s most successful projects for in-store investigation and purchase.

Meta isn’t only interested in the metaverse anymore. With plans to establish ‘The Meta Store’ in Burlingame, California on May 9th, Facebook’s parent company is branching out into the real world.

Customers will be able to interact with virtual reality headset Quest 2, smart glasses Ray-Ban Stories, and video-calling gadget Portal at the company’s first physical shop, giving them a first peek at the virtual world that will undoubtedly prevail in the near future.

After announcing their partnership and the introduction of the world’s first non-fungible token (NFT) flight ticket series, TravelX and Air Europa today announced the end of the auction for the first NFT air ticket, also known as the “NFTicket,” which raised USD 1,002,000.

The NFT in question, termed Future Eternal, was created by Carlos Betancourt. Future Eternal is a journey into an interplanetary multi-verse flight, an area of mind and spirit parallel worlds where the past and future are always evolving, sparking new possibilities and, finally, new memories.

The Group, which will be directed by Ali Sajwani, Chief Executive Officer of D-Labs and DAMAC General Manager, will be referred to as ‘D-Labs.’ The effort is part of the company’s broader plans to move into digital assets and non-fungible tokens (NFT), and he is entrusted with achieving the organization’s aim of becoming a top global digital brand.

After months of generating hype on social media and in the NFT community, Nike and RTKT have finally revealed what’s inside their mysterious “MNLTH” NFT: a pair of digital Nike Dunk sneakers, dubbed “Cryptokicks,” in a variety of colors and styles.

Its ambitions include rewarding users with DOSE tokens and NFTs for completing tasks in OliveX’s adventure game, which will encourage more people to exercise. Participants are challenged to accomplish various distances in the real world while holding their smartphones in this game.

Paco Rabanne and Selfridges have launched a partnership to embrace the non-fungible tokens (NFTs) world by producing clothes as NFTs.

Paco Rabanne’s couture debut was in 1966, with “12 unwearable outfits in contemporary fabrics.”

Now, the brand is taking the notion of ‘unwearable’ a step further by creating 12 NFT dresses based on some of its most innovative couture designs from the preceding seven decades, bridging the gap between the past, present, and future.

Chobani, the American food company specializing in strained yogurt, has filed a trademark application expressing its intention to enter the metaverse and embrace the world of non-fungible tokens (NFTs).

The Mercedes-AMG Petronas F1 Team has announced the launch of a series of NFTs in collaboration with FTX, one of the most innovative cryptocurrency exchanges in the world.

Throughout the year, the Team and FTX will release free-to-claim NFT “Ticket Stubs” – artistic interpretations of a Mercedes-AMG Petronas race ticket – as well as unique and rare NFTs created by some of the world’s leading artists, which will be auctioned off at various points during the 2022 season, beginning in Miami.

A limited-edition run of 1000 Miami-inspired NFT Ticket Stubs created by Mad Dog can be claimed by fans at nftmercedesamgf1.com starting on Friday 6th May.

The MSO LAB will house rare limited-edition McLaren NFTs, which will be available for the first time shortly.

The Genesis Collection, MSO LAB’s first NFT release, will be available by invitation only on May 11th, 2022, and will be an ultra-limited randomized mint showcasing one of McLaren’s most known automobiles, with a price and further specifics to be revealed in the coming two weeks.

McLaren Enters the Web3 with MSO LAB, a Dedicated Space for McLaren NFTs