How the Metaverse, VR and AR Will Impact Work in 2023 and Beyond

How will Web3 impact the workplace in 2023? In this post, we'll look at some of the current and future metaverse and VR applications that will be leading the way during this year and beyond. 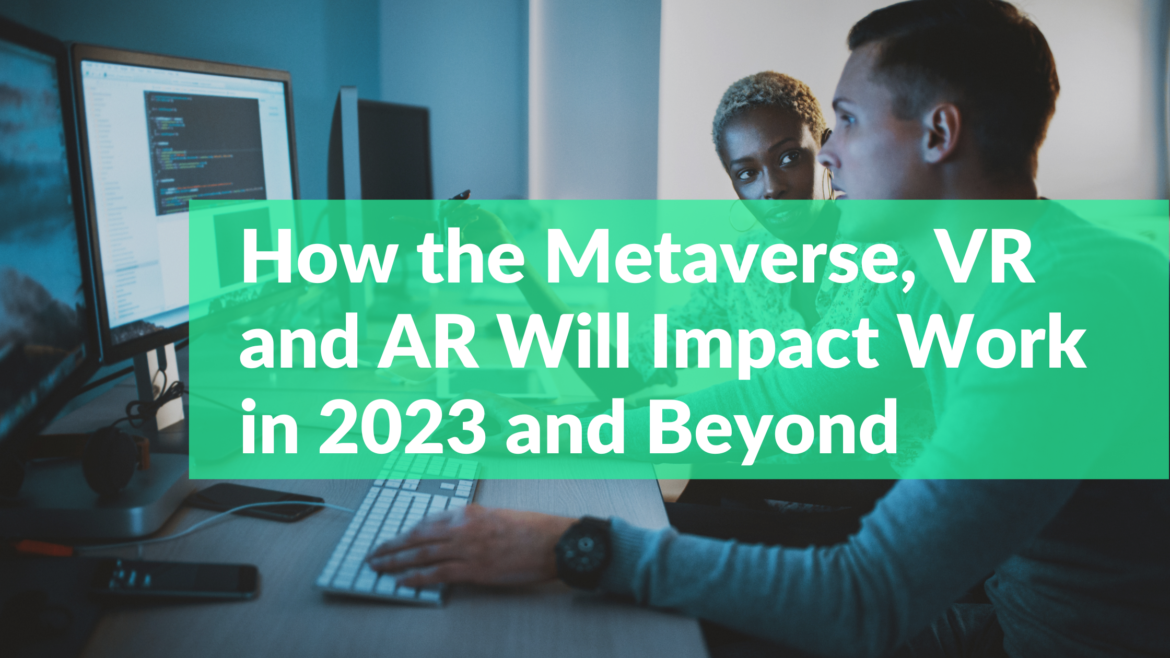 Since the pandemic of COVID-19 arose, people have developed new solutions to perform daily activities at distance.

As an outcome of this, the Web3 wave has already swept across the globe, inundating both individuals and businesses alike.

Two years of development and research have already yielded results, with Virtual Reality (VR) and Augmented Reality (AR) devices, as well as the introduction of new fully virtual platforms where people can meet and engage digitally, leading the way.

However, it is not only about entertainment. Web3’s promise is already making itself known in the workplace. New ways of learning, teaching, and interacting are ushering in a new society in which technology reigns supreme.

But how will Web3 affect the workplace? In this post, we’ll look at some of the current and future metaverse and VR applications that will be leading the way in 2023 and beyond.

Since the outbreak of the pandemic, online meetings have largely replaced in-person ones. Nonetheless, they can appear impersonal at times or prevent individuals from experiencing them as they would in real life.

Distances, for example, between various office sites, might make it difficult to interact with coworkers as well as external business partners or clients.

Similarly, folks who dislike being seen on video may prefer different alternatives. However, turning off the camera is not always the best option.

This is where virtual space, virtual meeting rooms, and avatars may help; users would be able to customize their own virtual avatar, define its identity with clothing and body customization, and attend a meeting in a more personal and active way.

Technology advancements such as more human-like expressions and avatars in general, as well as the development of VR equipment that allow improved vision and interaction in the virtual world, will improve the digital meeting experience even more.

In some workplaces, students and newcomers are not provided with opportunities for practice; medicine is an example, as real practice may carry non-reversible consequences.

In this way, the metaverse can provide a fail-safe environment in which individuals can practice and make mistakes without fear of irreversible outcomes.

Wolters Kluwer, for example, has teamed with BioDigital XR to bring human anatomy education to the metaverse. Through the use of VR and AR devices, students and practitioners may safely practice and prepare for the workplace by using interactive 3D structures associated with illness and models.

Although it is still in its early stages, this method has the potential to alter the way students are taught in schools and universities by allowing them to practice and acquire experience before beginning work.

Staff training has always been a challenge in any business. In most situations, impersonal, non-interactive video courses attempting to teach and force people to acquire and gain new abilities have shown to be a failure or just marginally beneficial.

In this regard, the metaverse can create a more engaging, completely immersive environment in which employees can virtually collaborate and participate in learning classes and activities.

Theoretical lessons would be combined with on-the-job training, resulting in a more strong workforce.

Webinars quickly replaced in-person gatherings as the epidemic spread. Nonetheless, as time goes on, organizers, presenters, and attendees feel compelled to become more involved and engaged while participating in such events.

Avatars, VR headsets, and other VR-enabled technology might play a major role, allowing individuals to actively participate in virtual conferences where they can ask questions, engage with presenters and other participants, and have a more immersive experience.

Although the metaverse and VR devices are still in their early stages of development, their presence is becoming more widespread as time passes.

Apparently, the workplace is and will continue to be one of the places where these emerging technologies will rule supreme during this year and beyond.

What comes next in the Web3 journey will be revealed by time and advancements in VR and AR technology.

BMW to Use Blockchain to Reward Customers and Streamline Operations