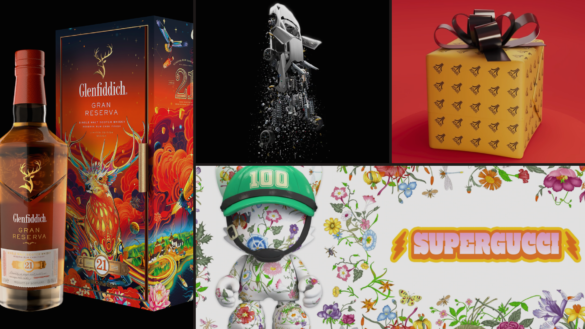 Several new NFT announcements and partnerships have come to light over the past few weeks.

Many popular companies have decided to join the NFT bandwagon and celebrate their well-recognized brands through digital art.

Around two weeks ago, Gucci announced its partnership with Superplastic, an entertainment brand specializing in designer toys and digital collectibles, to launch the SuperGucci NFT collection.

Alessandro Michele, the head of design at Gucci, teamed up with synthetic artists Janky & Guggimon to create the three-part NFT collection.

Only 250 NFTs will be minted, which will be released on three occasions, starting with the first drop today, February 1 at 10 AM ET., available on Superplastic’s website.

With the cooperation between luxury liquor NTF marketplace BlockBar and Glenfiddich Whisky, NFT is making its mark on the world of whisky as well.

Each token will have a price of 0.15 Ethereum (Ethereum) (about $413). NFTs can be purchased from the “Glenfiddich 21 Year Old Chinese New Year Limited Edition” page on BlockBar.com using Ethereum or a credit card.

Every NFT is linked to a physical bottle of Glenfiddich 21 Year Old Gran Reserva and serves as proof of ownership and authenticity.

A few days ago, Atari, the third-party company for Nintendo that dominated the video game market from 1975 to the early 1980s, teamed up with Republic Realm, an innovator and investor in metaverse and NFT technology, to release a commemorative NFT collection to celebrate its 50th anniversary.

Offering gift-wrapped NFTs, the Atari NFT collection celebrates the exciting future while reminiscing about the iconic Atari 2600 console and games like Combat, Swordquest, Asteroids, and Centipede.

An NFT in Atari’s collection is called a GFT. Holders of GFTs will find out exactly what is inside their surprise gift box once they unwrap their GFTs at a specified date.

The first GFT sale will begin on GFTshoppe today, February 1, 2022.

The renowned Italian luxury sports car manufacturer Lamborghini announced its entry into the NFT world a little over a week ago, and just a few days ago it officially announced its NFT project called Space Time Memory.

The NFT project consists of five images that depict a Lamborghini Ultimae launched into space, celebrating human exploration of the universe.

Fabian Oefner, the Swiss artist who created the compositions, captured over 1,500 parts of the actual car.

Through a QR code embedded in five units of the physical object, the Space Key, which was sent to the International Space Station as part of a collaboration with Lamborghini, users can access the digital artworks.

The first of five NFTs will be auctioned on February 1st at 4:00 pm CET through nft.lamborghini.com.