Johnny Depp announced his "Never Fear Truth" NFT collection and offered only those in his Discord channel a chance to buy one of his NFTs, causing Discord to register an anomaly due to the influx of traffic. 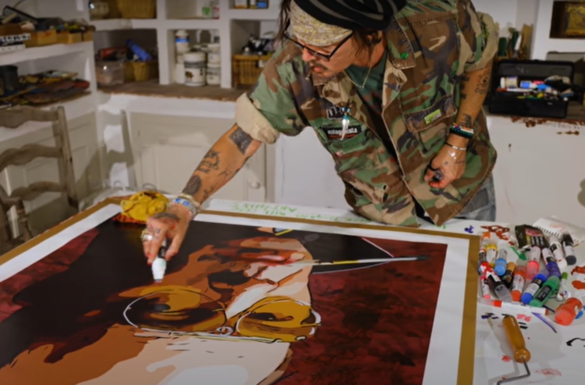 American actor, producer, and musician Johnny Depp announced the release of his first-ever NFT collection a few days ago.

The NFT project, dubbed “Never Fear Truth”, is composed of 11,111 NFTs personally created by Johnny Depp. 10,000 NFTs will be sold to the public, while 1,111 NFTs will be held by Depp, who will donate them to fans and charities of his choice.

NFTs can be purchased through www.neverfeartruth.com and secondary sales are handled by a leading marketplace for non-fungible tokens (NFTs), Rarible. Additionally, each NFT comes with a high-resolution physical edition that can only be redeemed once.

“My paintings surround my life, but I kept them to myself and limited myself. No one should ever limit themselves.” – Johnny Depp

“In my life, I have always had art […] it became an obsession, it became necessary […]” Johnny Depp said in an interview.

In the hours following the release of Johnny Depp’s “Never Fear Truth” NFT collection and the announcement that only members of his Discord channel would be able to buy one of his NFTs, Discord experienced an anomaly.

This resulted from a flood of traffic to the channel, which registered over 10,000 members within the first few hours, and has now surpassed 40,000.

Almost everyone was surprised by the NFT community’s extraordinary and unexpected response, which underscored the success of and enthusiasm for Johnny Depp’s NFT project.

How to buy Johnny Depp NFTs

Members of Johnny Depp’s Discord group (which has 42,957 members as of Jan. 30) will be able to participate in a raffle and a “fan art competition”, where they will be able to submit artwork, for a chance to purchase one of the 10,000 NFTs.

Successful applicants will be contacted on how and when to purchase their NFT.

The raffle closes on Feb. 9 and winners will be able to purchase the tokens on Feb. 17.