Basketball Player Stephen Curry Shoots 2,974 NFTs, One for Each 3-Pointer 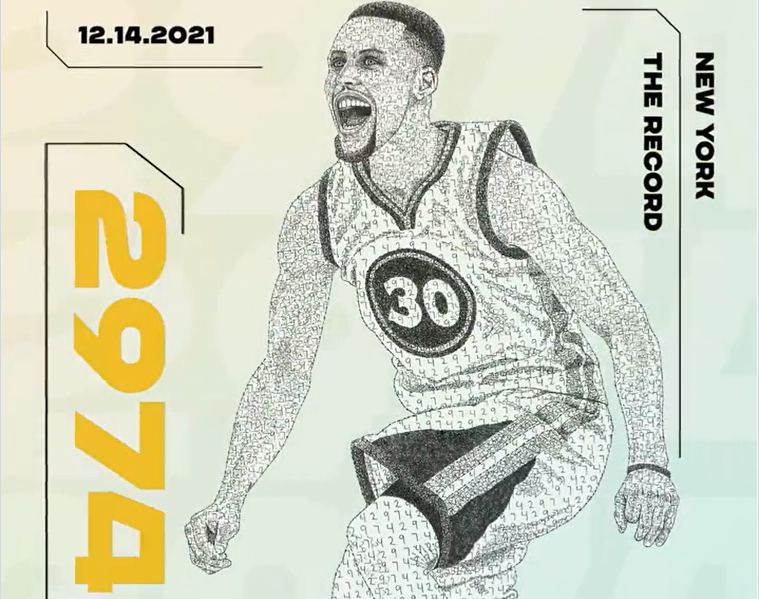 It’s no coincidence that Curry is increasingly getting himself heavily into the NFT community, as he’s already been doing quite a bit of work on his own. It’s perfectly timed that Curry has issued his very own NFT on this historical event. NFT revenues are scheduled to further support Curry’s charity, the Eat/Learn/Play, and introduce artists Floyd Norman, Disney’s premier black entertainer, and Andrea McDonald, a talented recent college student who is an ambitious female pilot.

100% of the profits will provide direct financial support to the community of Oakland and the struggle to end Child Hunger as well as providing youth with valuable schooling along with a secure space to be active and play.

2,974 NFT pieces will be released on www.2974sc.com in honor of the record number. Each of the NFTs consists of several emotion-filled sketches of Curry and uses the number “2974” to fill in its physical characteristics.

The individual NFTs all feature a specific three-pointer he made, including the game and the date it occurred. Those who purchased a 2,974 NFT minted will receive a bonus NFT designed by Norman for free to the consumer once the 2,974 NFT runs out. Specifically for this, Norman created two six-frame storyboards; one highlighting Curry’s overtime game-winning 38-foot three-pointer against Oklahoma City on Feb. 27, 2016, and the moment of Curry’s three-point shot against Cleveland in the 2018 NBA Finals.

Curry will additionally continue to surprise NFT holders on upcoming dates with giveaways and special offers of experiences that might involve signed souvenirs, game tickets, advance access to Curry Brand’s special limited-edition products, and much more.

Curry Brand and Under Armour are commemorating the achievement through charitable efforts, including covering basketball registration fees for 45 youths in partnership with Every Kid Sports, supporting programs in each of the 30 NBA markets via Good Sports, hosting 15 coaching education workshops via the Positive Coaching Alliance.

In addition, the company is renovating courts in Charlotte (where he grew up), Oakland (where he lived his entire career), and New York (where he broke the record). For more information on the NFT, visit 2974sc.com.

Vodafone is Auctioning the First Text Message as NFT