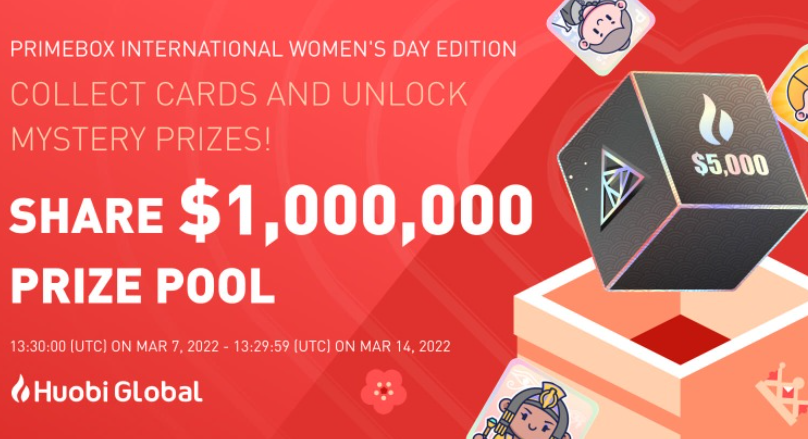 One of the world’s largest digital asset exchanges, Huobi Global, today announced a special Primebox promotion for International Women’s Day, celebrated on March 8. The promotion will run from March 7 to 14.

The promotion is meant to increase female involvement in blockchain and cryptocurrency.

Five types of cards are up for grabs, each featuring a different heroine and featuring a unique message. Users can unlock mystery boxes and win heroine cards by completing a series of tasks. A total prize pool of one million USDT will be shared among the winners.

Huobi Global chose five heroines for its cards: Marie Curie, Cleopatra VII, Mother Teresa, Florence Nightingale, and the archetypal Mother. These figures were chosen for their contributions to society, but also to inspire and motivate young women to achieve their own goals and dreams.

Additionally to a million-dollar prize pool, surprise rewards will be given to ten top-performing female users during the final phase of this promotion.

Ten of the top-performing female users will be asked to create and mint NFTs, and the collection – together with the five heroine cards NFTs – will be sold on Opensea. The winners will receive a portion of the proceeds from the sale of NFTs, and the rest will be added to Primebox’s existing prize pool of $1 million.

Kiss Bassist Gene Simmons Is Headed to the Metaverse