Home DAO What is a Decentralized Autonomous Organization (DAO)? – A Complete Guide
DAO

What is a Decentralized Autonomous Organization (DAO)? – A Complete Guide

A comprehensive guide to DAOs: find out what DAOs are, how they work, what their uses are, how you can create one, and more. 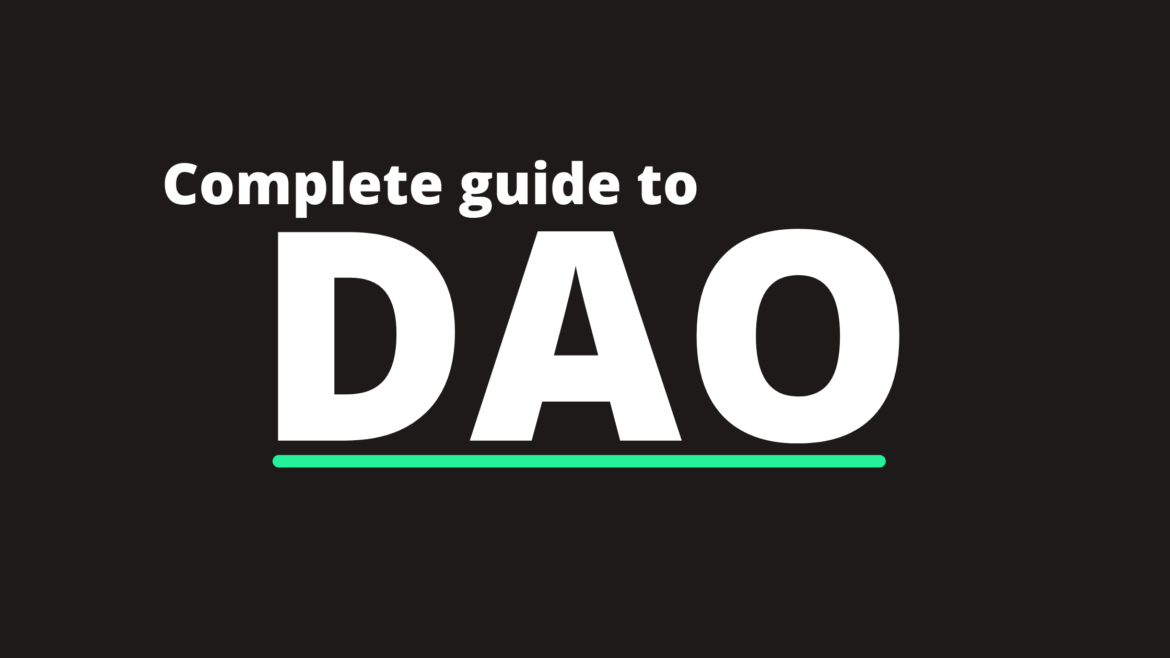 If you’re a crypto enthusiast, you’ve surely heard of DAOs.

By eliminating hierarchy, such organizations are the newest form of business in the digital age.

They can distinguish themselves in many ways, depending on their objectives.

No matter whether you are going to join an existing DAO or start your own, you must learn exactly what it is and how it works.

In this guide, we will provide you with all the information you might need about Decentralized Autonomous Organizations (DAO).

What is a DAO?

According to Wikipedia, a DAO is “an organization represented by rules encoded as a computer program that is transparent, controlled by the organization members and not influenced by a central government, in other words, they are member-owned communities without centralized leadership.”

Therefore, you should think of them as internet-based businesses owned by all their members, rather than by a single person. There are treasuries built into the system that no one can access without the group’s approval. Proposals and votes ensure that everyone in the organization has a voice in decisions.

How is DAO governance coordinated?

DAO governance is coordinated through tokens and NFTs, which grant voting rights.

Those individuals who possess these governance tokens in an electronic wallet and have confirmed their ownership can become DAO members.

As part of the governance process, members vote on proposals via blockchain, and the more governance tokens a member owns, the more power they have in the voting process.

How do DAOs work?

DAOs are built on smart contracts. Contracts specify the rules of the organization and hold the group’s assets. Once contracts are live on Ethereum, only a vote can alter its rules.

Any action that doesn’t follow the rules and logic of the code will fail.

As the treasury is also expressed in smart contracts, no one will be able to spend money without the group’s consent. This means that DAOs don’t need a central authority. Instead, decisions are taken collectively by the group, and payments are automatically authorized in the event that votes pass.

The application of a DAO can be quite numerous and can be beneficial in several business sectors.

Among the things you can do with a DAO are:

Token-based membership equates voting rights with ownership. As the most open form of DAO, it’s considered permissionless. The public is also free to trade or acquire tokens without real restrictions. This means that anyone can participate in voting.

DAOs based on share tokens remain relatively open, but they are permissioned. To become a member of a share-based system, you must submit a proposal. Usually, this proposal is accompanied by goods or services. Most people use tokens of the DAO to do this.

IBC is a decentralized autonomous organization run by its members collectively. It aims to create the gaming future and the intersection between real-life and the metaverse by building a gaming guild.

By providing a steady source of income, play-to-earn is transforming the gaming industry. Guilds like IBC DAO help players become part of this gaming revolution by investing in NFTs, metaverse plots, and early-stage P2E games.

Dash is an open-source cryptocurrency. It is an altcoin that derives from the Bitcoin protocol. Furthermore, it is a decentralized autonomous organization (DAO) that is managed by a subset of users called “masternodes”.

Gnosis is a decentralized platform built using Ethereum smart contracts that allows anyone to create prediction markets. Gnosis utilizes blockchain technology’s decentralized, transparent, and immutable nature to get forecasts that can be accessed by anyone.

DAO is a company providing all the functionality needed to run a DAO on the Ethereum blockchain. It is Aragon’s belief that its tools will promote the adoption of DAOs as an alternative form of governance.

How to create a DAO

There are several open-source solutions available for creating and starting a DAO. Aragon is one popular choice for the Ethereum blockchain.

Aragon-based DAOs are quite simple to create. Basically, you need to:

Other popular platforms for creating DAOs include Snapshot and DAOstack Alchemy.