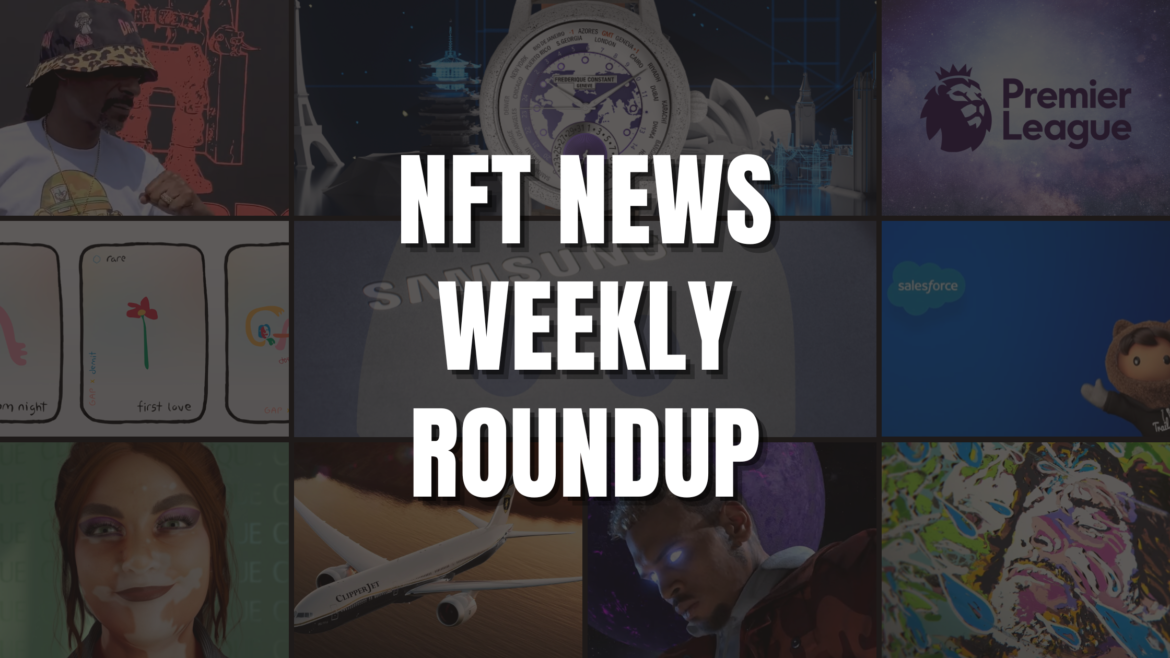 There have been many recent NFT news stories, including partnerships, new collection releases, and more.

NFTs continue to gain popularity showing no signs of slowing.

Here are some of this week’s most notable NFT news as part of our weekly NFT news roundup.

Snoop Dogg has announced his collaboration with Food Fighters Universe for the launch of an NFT-themed dessert restaurant in Los Angeles.

The restaurant will be backed by the Bored Aped Yacht Club NFT collection, which inspired the previous Bored & Hungry fast-food chain.

2. Frederique Constant Launches and Sells Out 888 NFT Watches within 48 hours

Swiss luxury watch company Frederique Constant has triumphantly joined the realm of non-fungible tokens (NFTs) by selling its collection in less than 48 hours.

In honor of the 10th anniversary of its Classics Worldtimer Manufacture, the watchmaker teamed with luxury NFT marketplace Exclusible and multi-talented 3D NFT agency Rarecubes to produce and sell a series of 888 Time to Travel watch NFTs.

Exclusible announced on Twitter that Time to Travel NFT watches, which launched on May 28, sold out in 48 hours.

3. The Premier League Is Preparing to Enter the Metaverse and Embrace NFTs

The Premier League has filed two trademark applications, showing intentions to enter the metaverse and the realm of non-fungible tokens (NFTs).

According to the applications, submitted to the USPTO on June 1st, the Premier League aims to provide NFTs, digital asset trading and exchange services, virtual footwear, clothing, headwear, sportswear, and more.

Demit’s painting reflects life in brilliant hues and an expressionistic manner, as seen through the eyes of his inner child.

After introducing an “NFT Aggregation Platform” for its smart TVs and entering the metaverse with its “837X” virtual shop on Decentraland, Samsung is now officially debuting on Discord.

The Samsung US Discord server is intended to be a fun, participatory way for fans, gamers, and artists to gain early access to products, events, NFTs, and other Web3-based marvels.

Salesforce, a cloud-based technology business, has announced the launch of its NFT Cloud pilot program, which is intended to give customers an easy-to-use and complete set of tools for managing their own NFT campaigns.

The NFT Cloud pilot program, in particular, will help brands to mint, manage, and sell NFTs directly on the Salesforce Customer 360 Platform, allowing them to build linked experiences in both the real and digital worlds.

Clinique has launched its first makeup NFT campaign in partnership with Daz 3D, the designer of NFP (non-fungible people) collections.

The “Metaverse More Like Us” Campaign specifically confronts the digital world’s existing lack of diverse avatars and marginalization. The campaign showcases the brand’s cutting-edge approach to developing a more inclusive society, as Web3 establishes itself in a significant way.

ClipperJet, North America’s premier private jet experience, today announced its foray into the world of non-fungible tokens (NFTs) with the launch of its “Founder’s Pass” NFTs.

In addition to his recent announcement of his upcoming album, “BREEZY,” which will be released on June 24th, the artist has also revealed his official NFT project.

The project, dubbed “THE BREEZYVERSE,” is a collection of 10,000 3D animated NFTs with sound and visual effects implemented on the Ethereum blockchain.

The NFT in question, entitled “Sunshower,” was created in collaboration with filmmaker David Bushell, and is a painted artwork made using acrylic paint tubes.

The digital artwork portrays a man in the rain, which depicts the ‘Sunshower,’ which is described as “a form of medicine with miraculous regenerative potential” and “a celebration of our communal light and those quietly exquisite moments that happen for us all.”

Givenchy Parfums Launches NFT to Support the LGBTQIA+ Cause