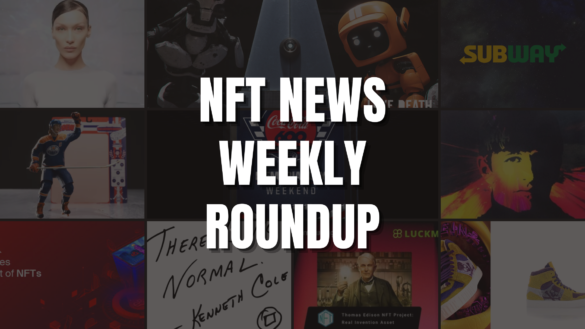 Recently, there has been much NFT news, including partnerships with NFTs, new collection releases, and more.

NFTs continue to gain popularity without a sign of slowing down.

The CY-B3LLA NFT collection, produced in collaboration with reBASE, will have 11,111 unique NFTs to encourage travel, community, growth, fantasy, and human relationships.

Each NFT features a unique 3D scan of Hadid and allows her fans to connect and engage with her.

Netflix has announced the introduction of a non-fungible token (NFT) collection for its Love, Death + Robots series, which embeds animated short stories from various genres such as science fiction, fantasy, horror, and comedy.

In honor of the release of the third volume of Love, Death + Robots (May 20), Netflix is encouraging fans to locate nine secret QR codes placed across LDR’s social networks, billboards, and digital platforms.

In order to access the art, users must seek and scan Love, Death + Robots QR codes.

3. Subway to Enter the Metaverse with Virtual Food and Restaurant

Subway, an American multinational fast-food restaurant company founded in 1965, has filed two trademark applications for its name and stylized S logo, indicating its ambition to enter the metaverse and the realm of non-fungible tokens (NFTs).

The business intends to provide virtual food and drinks, retail store services with virtual items, and a virtual restaurant environment with home delivery services, according to the applications.

eBay, a global commerce giant that links millions of buyers and sellers worldwide, announced the launch of a series of exclusive NFTs through a strategic relationship with OneOf, a top green NFT platform for communities across music, sports, and lifestyle.

By introducing some unique NFTs, Charlotte Motor Speedway, a racing complex in Concord, North Carolina, intends to provide spectators the opportunity to memorialize the historic 63rd running of the Coca-Cola 600 and acquire a rare digital souvenir from race week.

Julien’s Auctions has announced an exclusive auction including a selection of one-of-a-kind digital artworks, as well as exclusive signed canvas paintings by Ringo Starr.

The “Ringo Starr NFT Collection – The Creative Mind Of A Beatle” features an original animated painting with an exclusive custom-made drum composition recorded and played by Starr, as well as a special audio/visual motif of Starr’s time as a member of The Beatles, as well as signposts of his present and future creative journeys.

The UAE’s telecom service provider e& (formerly known as Etisalat Group) has announced the launch of its first non-fungible token (NFT) series, making it the region’s first technology and investment conglomerate to do so, advancing the UAE’s digital transformation and unlocking the metaverse’s potential.

The initial batch of NFTs will be limited in number and will be inspired by the company’s three fundamental pillars: networking, telecommunication, and digital transformation.

The “Normal Series” NFT collection consists of messages written by Cole in his own voice and hand-drawn style. Among the NFT messages are “Abnormal is the only normal,” “Nobody is normal,” “There is no normal,” and “Fk normal.”

Cole hopes to use his collection to challenge the inaccurate and prevalent views of “normal” and raise funds to end the stigma associated with today’s most prevalent public health crisis.

Through this collaboration, the Edison NFT initiative, dubbed “Chamsori Edison NFT,” will mint 1,000 actual physical Edison innovations using NFT and sell them on NFT markets such as Opensea.

The true Edison innovations include the first light bulb, an Edison Corporation stock certificate, and a phonograph.

Its approach involves selling Skull Sneakers, the authenticity of which is validated by NFTs sold in conjunction with the sneakers. The NFT, which includes built-in authentication and documentation of ownership, will allow the buyer to be the sole owner of the original item.