A summary of the most relevant NFT news from this week. 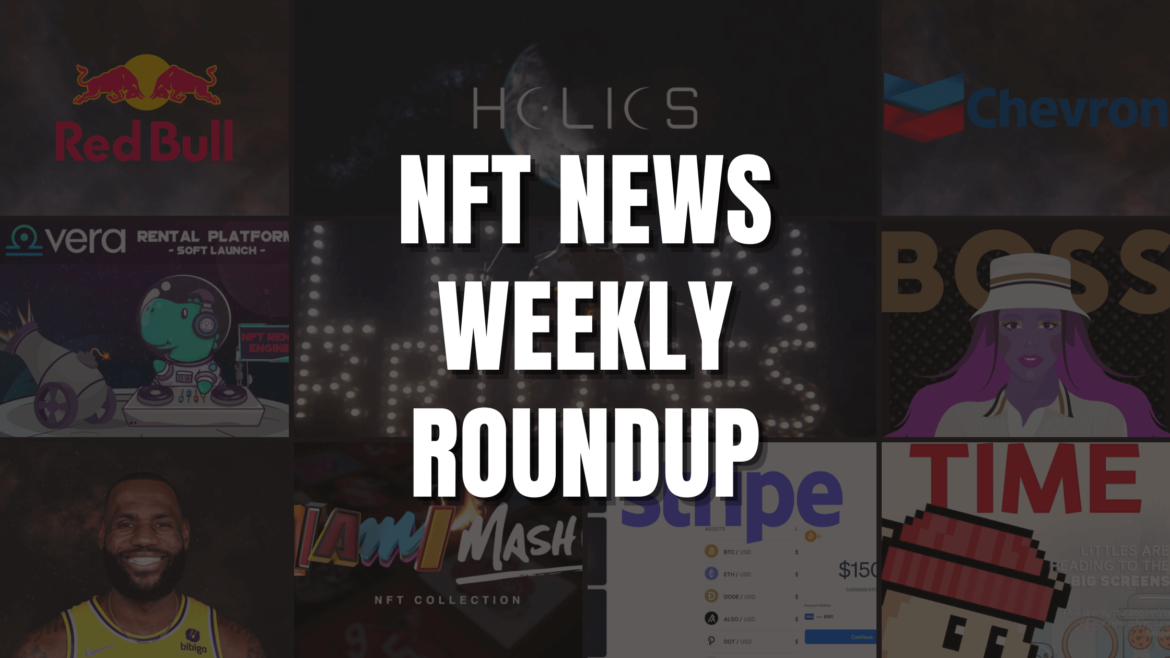 A steady stream of news releases about NFTs has been making the rounds lately; these include collaborations involving NFTs, new NFT collections, and companies filing trademark applications to enter the metaverse.

The adoption of NFTs shows no signs of slowing down, and it is expected to continue growing.

Here are our top ten NFT news stories from this week, as part of our weekly NFT news roundup.

The energy drink brand Red Bull has applied for a trademark expressing its intent to enter the metaverse and embrace non-fungible tokens (NFTs).

According to the trademark application, the company intends to provide virtual goods such as clothing, footwear, sports equipment, automatic vending machines, magnets, beverages, refrigerators, bottle openers, and much more for use in online virtual worlds.

Mission Helios is the first decentralized space community launched on the Ethereum network.

Mission Helios will launch a high-performance camera attached to LizzieSat to capture images of Earth as a first step. Images will then be turned into Non-Fungible Tokens (NFTs) that can be bought, sold, and sold by anyone.

Mission Helios’ first satellite imagery collection is titled Terra. It will include articles, geographical, environmental, and historical data about the locations the satellite captured.

The American multinational energy company Chevron has applied for a trademark for its name and logo, indicating its intention to enter the metaverse and attempt to enter the world of non-fungible tokens (NFTs) and cryptocurrencies.

Over $2 million in NFT rentals have been registered by Vera since the company launched in 2021, and it has established partnerships with notable NFT brands and apps, including OpenSea, Sandbox, and Decentraland.

At ETHDenver2022, the largest and longest-running ETH event in the world, Vera demonstrated its ability to rent out metaverse NFTs on three major NFT blockchains – Ethereum, Polygon, and Binance Smart Chain (BSC).

In this historic partnership, both brands have collaborated to create the ‘Dream Like A Boss’ mentorship program and launched a limited edition 1/1 NFT auction to fund the program.

Young girls participating in the program will receive mentorship in order to help them design the careers they love.

The “Mr. Wrangler” NFT will be released in two parts and will combine the physical, digital, and virtual worlds.

The first drop, the “Icon” tier features 75 digitally animated NFTs featuring dance moves choreographed by Bridges, while the “Legendary” tier consists of a 1-of-1 exact replica of Wrangler’s custom denim jacket and jeans outfit created for Leon Bridges which only he holds in his private collection.

According to the trademark application, the basketball player intends to provide non-fungible tokens (NFTs) featuring virtual goods, such as footwear, clothing, sports gear, home furnishings, and much more.

TIME Studios, the Emmy Award-winning television and film production division of TIME, has announced a partnership with another NFT creator to create an animated franchise as part of the company’s NFT initiatives.

The partnership will result in an original children’s series based on the “The littles” NFT collection, designed by creator and founder Wil Lee.

HEAT artists designed the collection to celebrate each of the eight different number styles of the Miami Mashup jerseys, highlighting the graphic worlds inspired by each.

The collection includes 400 NFTs (50 per number style), plus three 1-of-1 Miami Mashup Passes that allow holders to customize their Miami Mashup NFT with their name, number, number style, and other elements.

The company plans to support Web3 companies using its crypto APIs-the interfaces through which companies connect to Stripe’s platform.

As of now, the crypto and NFT marketplace supportability are available only in the United States, United Kingdom, and European Union, along with Japan for NFT sales only.

Along with the announcement, Stripe also launched an open drop of NFT collectibles dubbed “Cube Thingies” via Nifty Gateway. All NFTs have already been sold out unexpectedly.