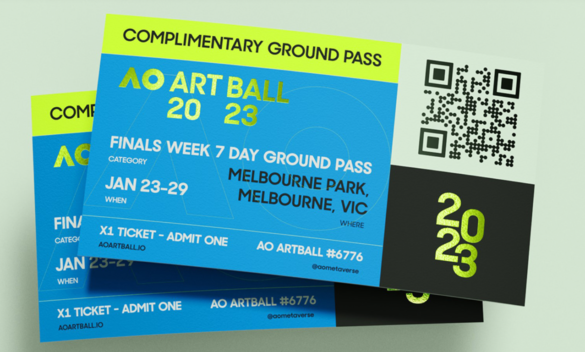 In collaboration with Tennis Australia and Web3 studio Run It Wild, AO introduced a reward program that allows ArtBall NFT holders to get access to several tickets to tennis, live sport, and entertainment events held in the real world and the metaverse.

In detail, each holder can claim a pair of complimentary Seven Day Ground Passes for week two of AO23.

“As one of the world’s biggest sports and entertainment events, we are always exploring opportunities to innovate, and we’re excited by the additions planned for AO ArtBall 2023. We look forward to welcoming AO ArtBall holders to experience the AO this summer,” said Cedric Cornelis, CCO of Tennis Australia.

In January, AO announced the debut of the ArtBall NFT collection. It includes 6,776 NFTs, each containing a 19cm × 19cm plot of each tennis court surface. Every time the winning shot from one of the 400+ AO matches lands on that plot, the NFT metadata will be updated in real-time with match information.

The collection’s release was accompanied by the launch of a metaverse space where fans could watch tennis matches in Decentraland. Users could explore the precinct, partake in challenges, watch previous AO content, and interact with players and other tennis fans.